Blues Get Off My Shoulder b​/​w I'm Beggin You

by The Lively Set / The Three Dudes 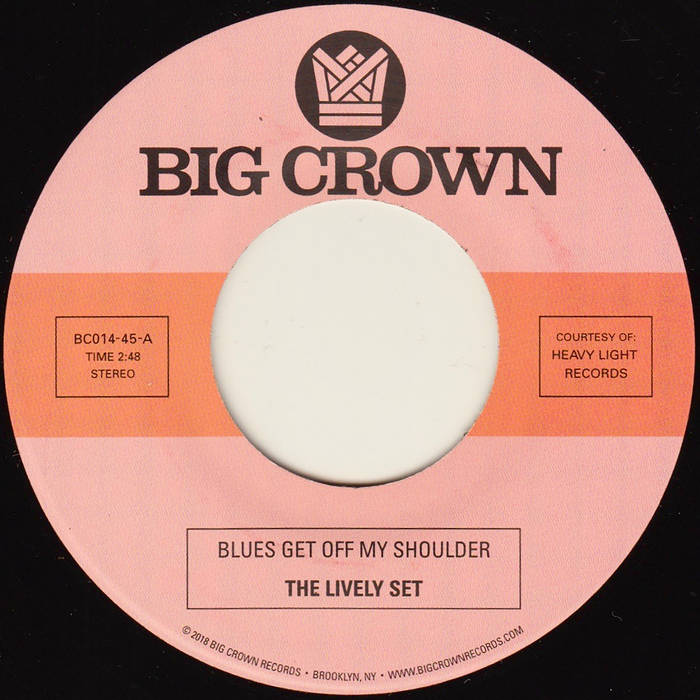 Big Crown Records is proud to present this killer reissue split 7” of two tunes that are equally as rare as they are great. An absolute must have for the funk and soul collectors that is sure to burn up the dance floor.

Side A is The Lively Set’s cover of “Blue’s Get Off Of My Shoulder” which was recorded in San Antonio, Texas in 1967 and originally released on Satin Records. It is rumored that only 10 copies have ever been found of the original, and with it changing hands in the neighborhood of $5,000, it’s a pleasure to get this side into collections and ears. The backing band for this tune is none other than Mickey & The Fabulous Five, who later went on to be Mickey & The Soul Generation. With pleading vocals by frontman Buddy Washington and a heavy duty groove peppered with blaring horns and rhythm guitar this is a lo-fi bomb of a record.

Side B, also by way of San Antonio, recorded in ’67, and released at the time on Satin Records, is The Three Dudes “I’m Begging You”. This write up on the history of the group and recording by way of musicologist Alex La Rotta:

In a city celebrated for its Latin-infused ‘West Side Sound,’ San Antonio’s The Three Dudes — Reginald Whitaker, Lawrence Alexander, and Charles Larry Russell — were among the East Side’s lesser-known (but equally talented) black soul groups of the 1960s. Still, San Antonio pop music is almost multiracial by requisite — it’s a reflection of the region’s remarkable diversity, distilled from centuries of intersecting civilizations, immigrant settlements, and a myriad of servicemen and women within the city’s vast military complex in that most south-meets-west Tex-Mex pocket of the Lone Star State. But if you ask Russell, there really was no ‘side’ when it came to local music: east crossed west, and vice versa, in the formation of Alamo City Soul. “A lot of the groups here were mixed back then,” remembered Russell. “It was no big thing to see blacks and Mexicans hanging out and making music together.”

The ‘dudes’ met in choir at Sam Houston High in the mid-sixties — a predominantly white school that also graduated the city’s most acclaimed pop stars, Doug Sahm and Augie Meyers of the Sir Douglas Quintet, a decade prior. Sharing a mutual passion for the classic doo-wop harmonies of The Platters and The Cadillacs, they assembled a combo: Whitaker helmed lead, Alexander sang bass, and Russell carried the harmony. “Reginald had this Jerry Butler voice, and the girls just swooned,” recalled Russell. “We’d walk down the halls and sing – you know, it had that echo chamber effect – and everyone would just get quiet. We never got in trouble for being late because all the teachers were standing at the doors and smiling, too!”

Honing their talent, they eventually won first place at the Student Council talent show in the fall of 1967, singing the Whitaker-penned “Sad Little Boy” — one of two songs the group recently recorded with local producer, E.J. Henke, on Satin Records. The news even made a splash in the local San Antonio Register. Lacking a band, they were backed up by a then-unknown group of young James Brown disciples who were calling themselves Mickey and the Fabulous Five — a group of black and Tejano teenagers who successively kickstarted the Texas Funk revolution under their better-known alias, Mickey and the Soul Generation. The flip side, “I’m Beggin’ You” — a new style of up-tempo R&B music which emphasized the first beat of the measure with horn riffs and instrumental breaks — is notable as an early archetype of funk music.

Ultimately, Henke’s limited distribution network and a coalition of disapproving parents ensured the teenagers’ fate to one-hit wonderdom; their short-lived fame stretched only to graduation. By summer, the three parted ways. Russell left to Houston, then Philadelphia, to later record a few more singles with different groups (including the incredible and elusive Four Dudes single on Sivad-J Records), to little success. Finally, this superb slice of Texas Soul is being unearthed from obscurity to its rightful re-release to a wider and soul-loving audience on Big Crown Records.

Bandcamp Daily  your guide to the world of Bandcamp

outré black metal, with a Victory Over the Sun interview and music from Liturgy and Jute Gyte.